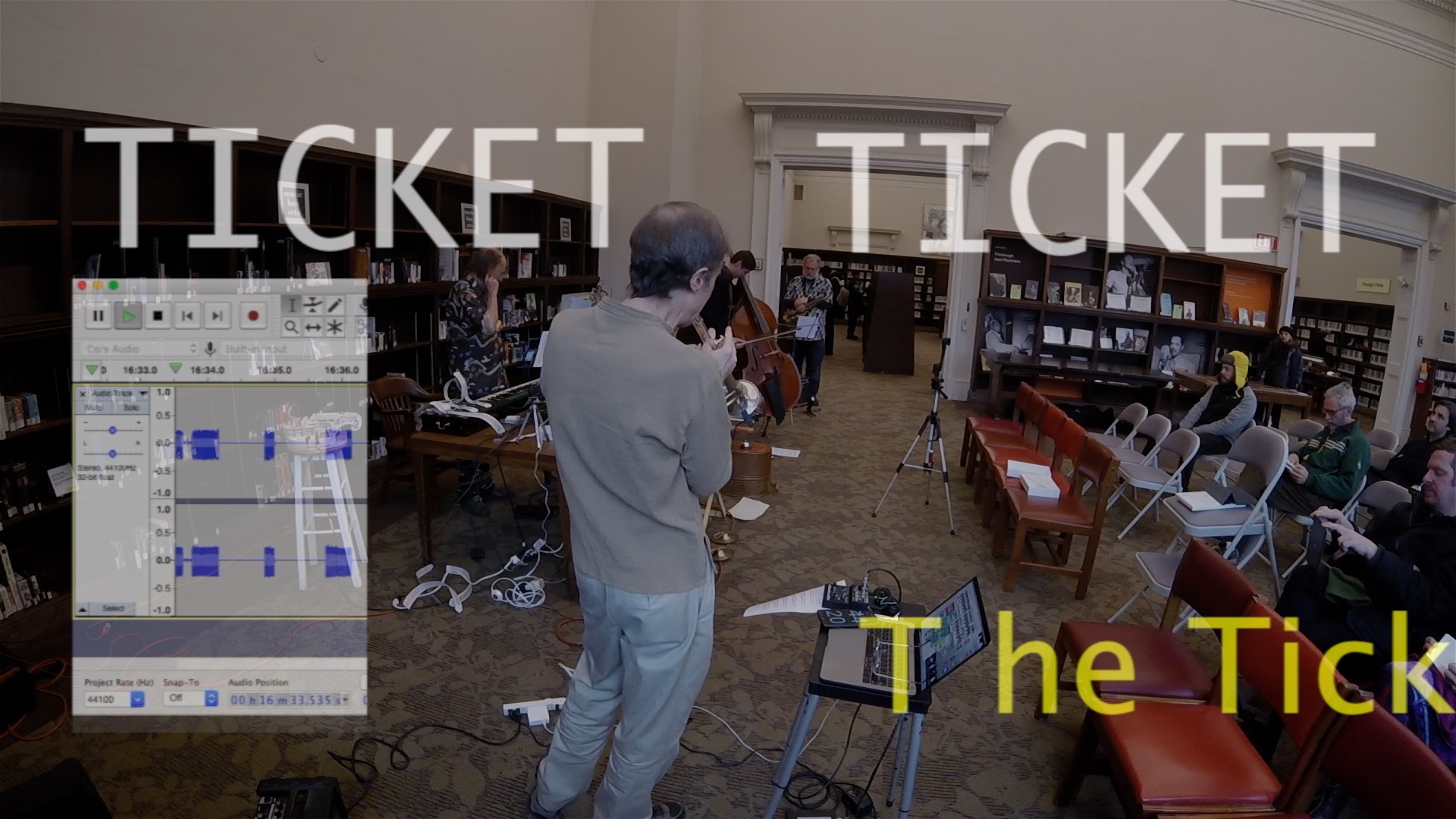 "The Ticket that Exploded @ the library": When I was 15, probably in the summer of 1969, I heard the band Soft Machine's song "Hope for Happiness" on Baltimore rock radio & loved it.  As I recall, most Baltimore radio was abysmal so I found Soft Machine to be of exceptional quality.  It wasn't until perhaps 5 years later that I realized that the band had gotten their name from a William S. Burroughs novel.  I read the book & was astounded.  It was shocking.. & subversively stimulating.  I read almost every Burroughs novel in quick succession, gradually losing interest somewhat but finding what seemed like the most experimental quintet of novels (Naked Lunch, The Soft Machine, The Ticket that Exploded, Nova Express, & The Wild Boys) to be astonishing.  I even got to witness Soft Machine live (Mike Ratledge, Roy Babbington, Karl Jenkins, John Marshall) in a dreary Baltimore bar when I was underage, using a fake ID.  It was the beginning of the end for the band's quality (IMO) but they were still great.  Now, 51 years later, I decided to finally name a (M)Usic project after the successor book to The Soft Machine both as an homage to the band & the author AND because I like the name.  Otherwise, the (M)Usic has little or nothing to do with any of the above.  When I 1st thought of the project, perhaps as much as a decade before, I thought of having (M)Usical material somehow akin to what was the best of Soft Machine.  An example would've been a piece of mine called "Birds of Villa Villa-Lobos (after Michael Pestel)" (published on record in a limited edition of 100 in Germany as part of the Fluxus series as Psych.KG 243 in July, 2015) but I quickly discarded that idea.  Originally, The Ticket that Exploded (or just The Ticket) was intended to be a quintet but it got reduced to the quartet of myself (tENTATIVELY, a cONVENIENCE), Roger Dannenberg, Ben Opie, & Jeff Weston.  Mutations of the group can be expected.  This was our very 1st gig — at the Carnegie Library, Oakland branch, Music Department in Pittsburgh on Sunday, January 19, 2020.  There was a tie-in to a small display of scores, CDs, & books by Ticket members in the library's collection & loaned for the display.  Interspersed in the movie from this ( https://youtu.be/Uw2sDzENK6o ) is footage from that display & its installation.  Thanks very much to the library employees for being so open to such a 'strange' event.  The piece, such as it is, is very simply structured:

The Ticket that Exploded OUTLINE

A TIMER IS REQUIRED.

0-5:00: Begin with the sound to "Bugle Call Medley" ( https://youtu.be/tNlcpQdgqhc ): the 1st minute only tENT plays with the recording, the next 4 minutes everyone is welcome to join in.  Players can either restrict themselves to the 5 notes of the bugle scale: C4, G4, C5, E5, G5 (actually one half step lower); or play whatever you feel like playing — the most important thing being to just play during the end 4 minutes & to then STOP for a brief pause between sections.

5:05-11:05: tENT plays a solo for 1 minute.  Everyone joins him for the ensuing 5 minutes & then STOP for a brief pause between sections.

11:10-18:10: Jeff Weston plays a solo for 1 minute.  Everyone joins him for the ensuing 6 minutes & then STOP for a brief pause between sections.

26:20-35:20: Roger Dannenberg plays a solo for 1 minute.  Everyone joins him for the ensuing 8 minutes & then STOP for a brief pause between sections.

35:25-45:25: tENT plays along with the 1st minute of "The Ticket" soundtrack ( https://youtu.be/6USs5zYf6jg ).  Everyone joins him for the ensuing 9 minutes & then STOP for a brief pause between sections.

The result is a somewhat oneiric morphing narrative.  - February 5, 2020 notes from tENTATIVELY, a cONVENIENCE

Uploaded by tENTATIVELY, a cONVENIENCE on February 11, 2020